The board and remuneration committee are pleased to present the remuneration report, which sets out our remuneration philosophy, policy and the outcomes for executive and non-executive directors. This report is aligned to best practice, taking into account King IV™ and the JSE Listings Requirements.

The past 18 months have seen significant organic and acquisitive growth in Stor-Age’s portfolio, and our position as sector specialists remains critical if we are to achieve our future growth ambitions. In light of this, we recognise the importance of ensuring competitive remuneration structures to attract and retain talented employees with the appropriate skills to execute our business strategy.

During the year, the remuneration committee:

We are of the view that Stor-Age is now entering a new phase of managing its growth trajectory and is maturing as a listed company.

Since listing in November 2015, Stor-Age has consistently delivered strong trading results. The current executive directors, being the founders of the business, have played a significant role in this growth. Over the past three years, the executive directors have received a basic salary with no variable remuneration, and received a modest 6.0% increase in the year under review despite an exceptional performance. Further, no increase was awarded in 2016. Executive director remuneration is considerably lower when compared to our peers in the REIT sector.

Stor-Age’s future success depends on attracting and retaining talented, experienced and motivated individuals. Outside of the executive directors, we have assembled a senior management team equally fundamental to maximising shareholder value and ensuring sustainable growth. The development and retention of this talent, particularly the specialist skills specific to the self storage sector, are critical to realising long-term value creation.

It is therefore necessary for us to enhance our remuneration structures with a variable portion, including both short- and long-term incentives, which retains, motivates and rewards employees appropriately. The remuneration committee is subsequently reviewing the current remuneration structure against best practice and, where appropriate, will consult with shareholders regarding future proposals.

We express our gratitude for the continued support received from our shareholders and are committed to upholding the trust earned among our stakeholders.

At the annual general meeting (“AGM”) held in 2017, Stor-Age received an 83.6% non-binding advisory vote in favour of our remuneration policy.

In line with King IV™, Stor-Age will table the remuneration policy and implementation report for two separate non-binding advisory votes at the AGM. If shareholders do not approve both by more than 75%, the board will institute a formal engagement process with interested shareholders to assess their views and determine the actions needed to resolve concerns.

Stor-Age has delivered another set of pleasing results in 2018. We look forward to embarking on a journey to better align our remuneration practices with our strategy, and to ensure our remuneration policies and practices are transparent and fair. We trust our efforts will be welcomed by shareholders and reflect, yet again, a favourable outcome at the AGM.

This remuneration policy is subject to an advisory vote by shareholders at the AGM to be held on 23 August 2018.

Stor-Age’s remuneration policy seeks to attract and retain high-calibre and appropriately skilled employees and executive directors. Stor-Age’s philosophy is that employees should be fairly remunerated and rewarded for their contribution. An integral part of this philosophy is to align the interests of employees with those of Stor-Age’s shareholders by providing meaningful equity participation.

As Stor-Age has matured and grown its portfolio, this philosophy should adapt in line with the next phase of Stor-Age’s life cycle. As set out in the chairman’s statement, the remuneration committee and management are currently working together to determine the appropriate remuneration structures for this next phase.

As mentioned above, executive directors do not currently participate in any short-term incentive schemes.

Stor-Age introduced a share purchase and option scheme (“share purchase scheme”) on listing. This serves as a mechanism to create ownership opportunities for the executive directors and selected senior and middle management employees (including store operations managers). Selected individuals are offered the opportunity to acquire Stor-Age shares by way of an interest-bearing loan. To be eligible, these individuals must be employed by Stor-Age for more than one year and have an above-average performance rating.

The share purchase scheme provides for the grant of options and for the purchase of shares on market-related terms. No options have been granted to date.

The share purchase scheme is essentially a ‘management buy-in’ plan and exposes participants to real financial risk of share price growth and the repayment of the full loan for the purchase of the shares. This includes instances where the share price decreases from purchase date.

The features of the share purchase scheme are as follows:

All employees receive a basic salary at a level appropriate for the role and responsibilities. Stor-Age regularly reviews the basic salary of all employees to ensure it remains market related. Employee salaries (excluding directors) are reviewed annually, taking account of individual and overall company performance, as well as an employee’s experience, qualifications and responsibilities.

Store-based operations employees are paid commission in addition to their basic salaries. This is based on performance relative to their budgets and achieving pre-defined targets. Other permanent employees (excluding directors) receive a component of variable remuneration dependent on their respective employment grade and individual performance.

Stor-Age is committed to fair and responsible pay practices in line with its duty to remain a responsible corporate citizen. Various factors are taken into account when considering fair and responsible pay practices, such as sustainability and Stor-Age’s strategic objectives. Internal pay levels are reviewed on an ongoing basis to ensure alignment with the principle of equal pay for work of equal value. Furthermore, the remuneration committee is mandated to ensure that executive director remuneration is justifiable against remuneration levels of employees throughout the company.

The proposed increases to non-executive director remuneration are considered against the average increase levels approved across Stor-Age, as well as against the results of benchmarking performed.

This implementation report is subject to an advisory vote by shareholders at the AGM to be held on 23 August 2018.

Stor-Age was incorporated on 25 May 2015. On 16 November 2015, its shares were listed and began trading on the JSE. The table below compares certain performance measures against the average executive directors’ basic salary increase percentages over the past two years.

In line with Stor-Age’s commitment to fair and responsible remuneration, the remuneration committee carefully considered the increase levels of executive directors against the increase levels throughout the company and they are satisfied that it is in line with Stor-Age’s policy. It should also be noted that no salary increases were accepted by the executive directors in 2016 and 2017, reflecting their commitment to the long-term success of the company.

Although the awarding of shares is not considered to be remuneration, it does impact the executive directors’ shareholding in Stor-Age and ensures alignment with shareholders. We have therefore chosen to include these details in the remuneration report.

Further details relating to the share purchase scheme and the shareholding of the executive directors are set out in note 4 and 26.3 of the annual financial statements.

The table below sets out the remuneration paid to non-executive directors: 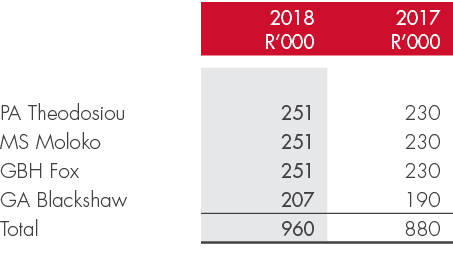 This report was approved by the remuneration committee and the board. Both are satisfied that there were no material deviations from the existing remuneration policy during the 2018 financial year.